Beautiful piece of prose by C.E. Anderson about "Deer Hunting In Michigan", printed in Forest and Stream (later merged with Field & Stream) in 1877. 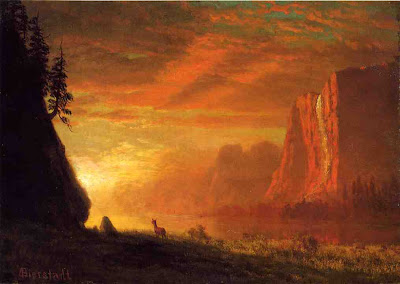 "I wait in the grand solitude of the of the virgin forest, with ears intent for the voice of the hounds. I cannot tell how long I waited. I only know that in a supreme moment of contemplation, when the soul seemed filled with the greatness, the grandeur, the glory of the illimitable wilderness, I was suddenly aroused to a realizing sense of the situation by a distant cry of the hounds, distant and low at first, gradually coming nearer and more distinct; now evidently running to the north, now to the south. Oh! The music of that full chorus, which now began to break loudly on the still air, was inspiring. All else was still as death, every particular hair was standing on end with expectation.

“A’ah! There is a commotion in the brush by that stump. A crash in the thicket and out rushes like the wind an old gray-haired monarch, plunging like lightning right by my wondering and bewildered vision, and myself powerless to raise an arm to stop him. In an instant, however, Richard Greenhorn is himself again, and I send a wild shot after him. He is away now two-hundred yards, going straight from me. I raise my Winchester again with comparative deliberation this time. Ah! Old fellow, where are you now? His heels fly up, and turning a complete somersault he lies still. The shot had struck him behind the ear and entered his brain, and in falling his momentum had carried him completely over.”