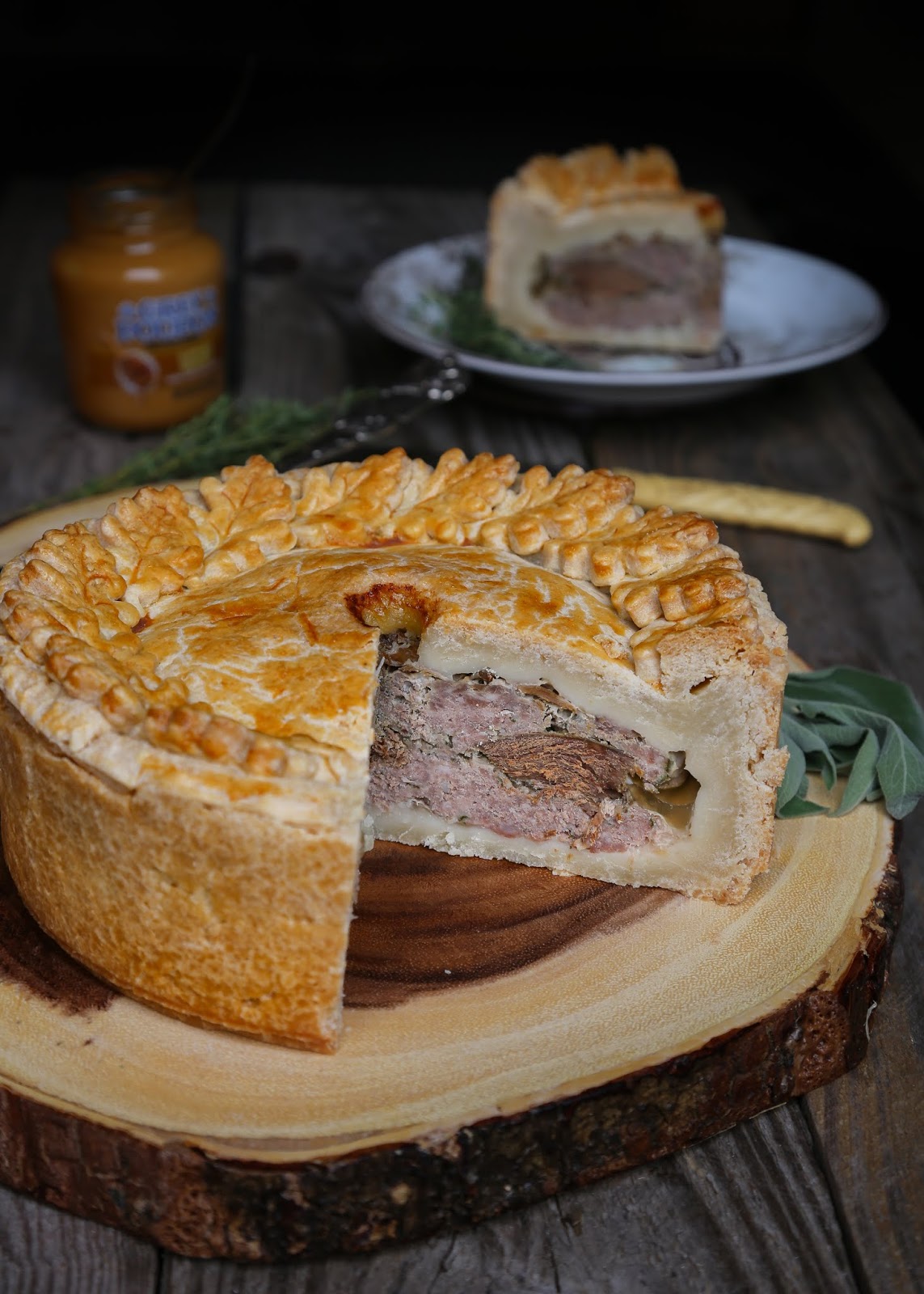 Savory (not sweet), sturdy (not flaky), filling (and not superfluous) ... the British meat pie is a complete 180 from what we Americans understand as "pie." This iconic English dish has graced many tables across the centuries. From royalty to peasantry, the meat pie is a meal on its own, along with an intriguing history to boot.

The present-day meat pie is a direct descendant of those prepared during the medieval period. The use of a hard, standing crust required no baking dish, and to prolong shelf life during a time when refrigeration was non-existent, jelly was inserted through the top of the pie to fill in air pockets, which warded away oxygen that led to spoilage. The crusts on these early pies were so hard and thick that they served as cooking and carrying vessels only, good for packing on long journeys across land and sea. When the contents were consumed, the crust was tossed aside.

As unappetizing as this crust might've been, it takes credit for the meat pie's distribution across the globe. These pies were transported on ships by explorers and missionaries, and their influence reached far and wide. Where there was access to grain to make dough, a variation of the pie sprung. 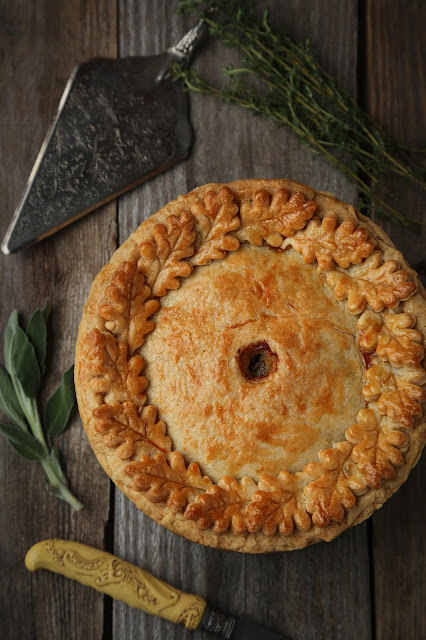 Thankfully, the French and the Italians caught hold of the pie around the 1400s, and refined the crust that it finally became edible. The modern-day hot water crust pastry is not only sturdy enough to stand on its own after baking, but it's also made with copious amounts of lard, adding flavor and tenderness. With the invention of the pie pan, there was no longer a need to make a crust that could break teeth. You can read more about the fascinating history of pie here, which goes as far back as the ancient Egyptians: https://medium.com/s/eating-historically/medieval-steak-and-ale-pies-6994f22f59e8

This is not an American fruit pie, nor is it close to chicken nor shepherd's pie. Instead, it's the modernized version of an archaic recipe, one that has retained the spirit of a bygone time, created, reworked and refined by human ingenuity and necessity. The meat pie's beginnings required that it was filling, portable and could be eaten without utensils and heating. These pies had long shelf lives, whether supplied on a ship bound to conquer lands across the ocean, or stored away in a castle's larder to get residents through the winter months.

In the 16th century the game pie became popular in England. Imagine hungry foxhunters coming in from their morning hunt. Or a group of bird hunters returning to camp for lunch after shooting. Or a farmer sitting down for high tea in his little house after tending to his cows and his fields. Or consider the weary traveler, who having spent all day bouncing in a cold, damp carriage across the English moor, finally stopping for rest at a tavern beside the lonely road; then imagine his delight in a hearty slice of game pie and a pint of ale beside a warm fire. Few recipes make me fantasize about a different time and a different way of life, let alone events that never happened. No one can forget Joffrey Baratheon's ceremonial pigeon pie on his wedding (also death) day. Wasn't it glorious? The whole episode was – aahhh... those were the good ol' days. 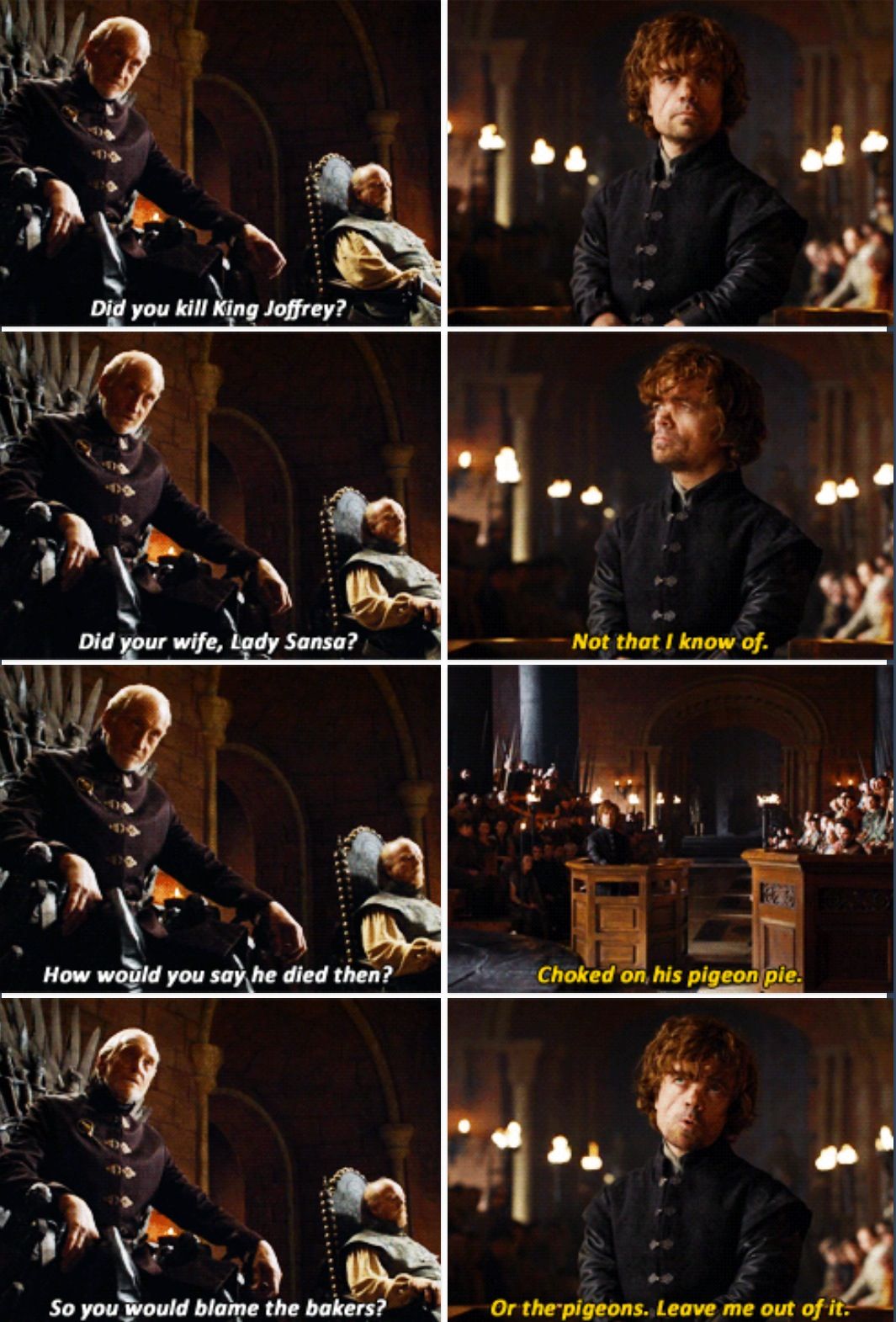 The meat pie is a relic of old Europe, and for the most part, it has stayed true to its basic form. I find recipes like this one endearing. It's too bad the savory pie didn't catch on after the pilgrims brought it to the Americas. We love our fruit and cream-filled pies too much here. 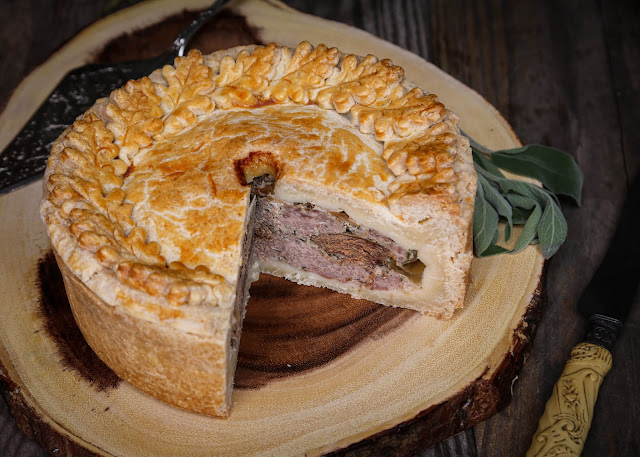 From what I gather, there are three main British pies that require the standing crust pastry: the pork pie, the game pie and the gravy-filled steak and ale pie (and its variants).

This recipe is a combination of the British pork and game pie. With a filling that is more dense and compact than the gravy-style pie, layering of different meats and ingredients is possible, so that when you cut into it, the slices hold their shape and you could clearly see every layer. If you take your time when making it, it could be beautiful. It's similar to France's pâté en croûte. Since I only had two pigeons, which my friends Carine and Larry gifted to me on my birthday, this style of pie allowed me to highlight what little pigeon I did have with every slice, while incorporating delicious, fatty Mangalitsa/Berkshire cross ground pork – even the pork was Old World, and we can taste the difference. We are lucky to have a great butcher nearby. Because it's an important component, I wouldn't skimp on the pork portion of this recipe. 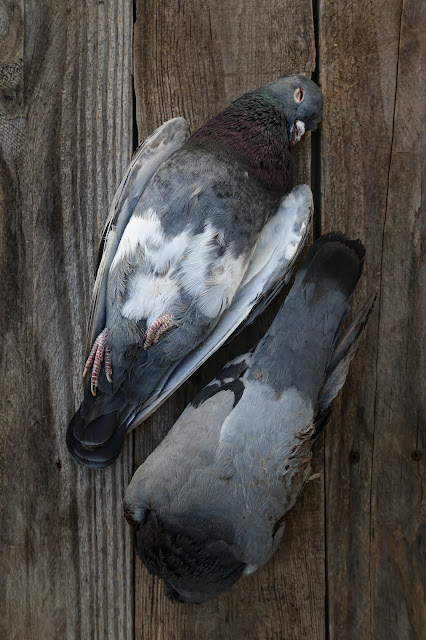 The pigeons were also older. I reached out to my friend Tom, who is a retired wildlife biologist in Nebraska, about eating pigeon. He wrote back to me:

"We ate pigeons we shot from barns when I was a kid. I think you'll find them very tough especially since they could be two years or older. Don't overcook as you know for any lean game unless you slow cook. There's a reason fine restaurants prepare squab and not adult pigeons."

The pigeons I cooked did seem tough, even their skin. Had I known this beforehand, I wouldn't have bothered to pluck and save the skin. Unless your birds are young, my suggestion would be to skin them whole. Set aside two days for this recipe. It's not one that you can make and eat immediately. Consider it a toil of appreciation, and an opportunity to learn how people cooked and ate during a time when resources and tools were limited. During these odd days, recipes like this one seem all the more relatable. 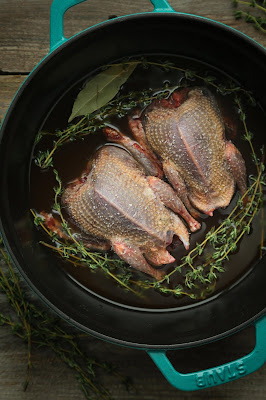 1. Preheat oven to 350° Fahrenheit. Place pigeons, 2 cups of stock and thyme in a small Dutch oven or baking dish. Liquid should reach halfway up the birds, and if not, add more. Cover and bake for 1 hour and 30 minutes, or until birds are tender. Make sure to maintain enough liquid in the pot.

Remove pigeon breasts from the bones. Then pick meat off the legs. Set meat aside. If skin seems tough still, discard them. 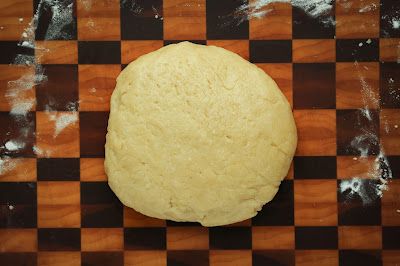 2. To make the hot water crust pastry dough, heat water and lard in a saucepan until lard is fully melted. Add the flour and salt in a large mixing bowl. Pour in the water and lard mixture and stir to combine. When the moisture is absorbed, turn out the dough onto a lightly floured surface and knead just until the dough comes together and looks smooth. Dough might be hot. Do not overwork the dough. Cover and set aside. It should be room temperature when you form it later. 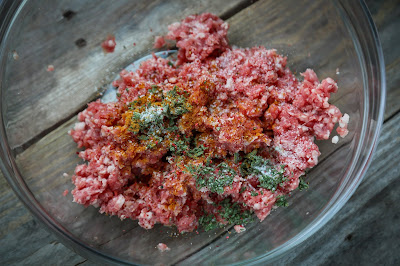 3. In another mixing bowl, combine pork mixture ingredients and knead until the texture starts to turn more pasty and less crumbly. 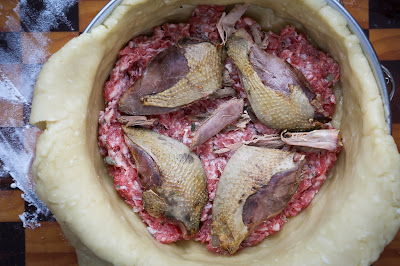 4. Line the bottom of a spring form baking pan with parchment paper. Lightly grease the sides with butter.

Then take a little more than half of the dough and roll it out so that it becomes more manageable. Then place it in the pan and form it up the sides of the pan with your fingers, shooting for 1/2-inch thickness everywhere. If you accidentally tear the dough, patch it with a small piece of dough. 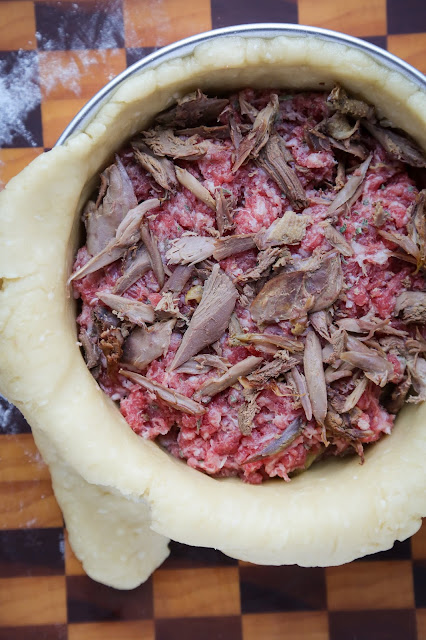 Spread half the pork mixture into the bottom, but not too tightly against the edges to allow room for the jelly later. Spread out the pigeons breasts onto the pork and then push down the rest of the pork on top of that. Sprinkle the shredded pigeon leg meat on top of everything.

It's important that the dough is room temperature or a little warmer when you work with it. If it's too cold, the lard will harden, making the dough a lot less pliable and crumbly. 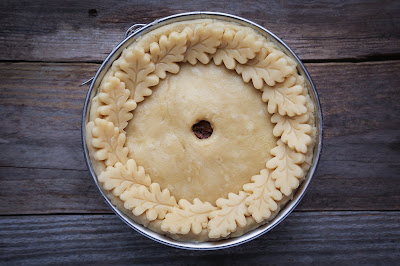 5. Roll out enough dough to fit over the top of the pie and crimp the edges. Cut out a hole in the top for venting.

If you have leftover dough, and you should, you can cut out optional decorative pieces. Use the beaten egg to "glue" them onto the lid. Then lightly brush the top of the pie with the beaten egg. 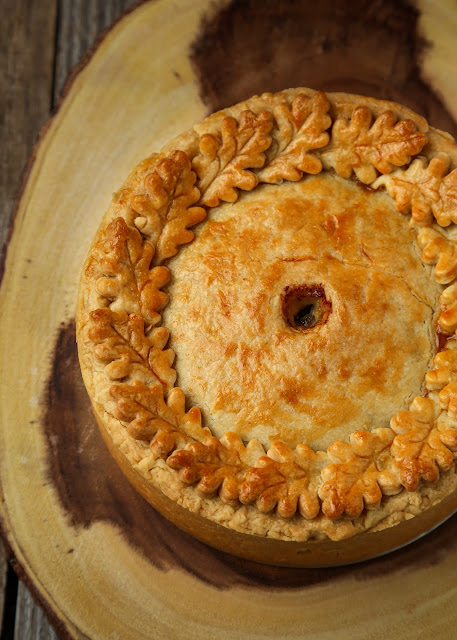 6. Place the pie onto a rimmed cookie sheet and bake at 355° for 30 minutes. Then lower the temperature to 320° and bake for an additional 90 minutes.

If the edges brown too quickly, cover those areas with foil.

Remove pie from the oven and allow it to cool before removing the springform pan. 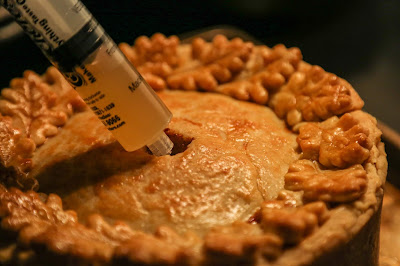 7. When pie is cooled, begin preparing the jelly. In a small saucepan, add the stock and sprinkle gelatin powder on top. Allow to sit for 1 minute. Then turn up heat to dissolve completely. Season to taste. Pour the liquid jelly into the top of the pie, using a baster, food-grade syringe or funnel. You may or may not use all of it. Pour in a little at a time and stop when the meat no longer absorbs the jelly. 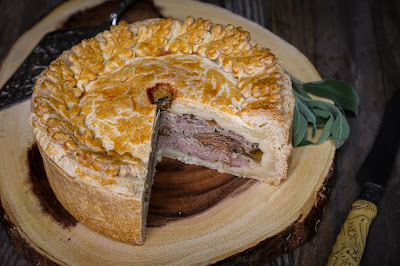 8. Place the pie in the refrigerator overnight, loosely covered, to allow the jelly to set.

Slice and serve at room temperature with good mustard, tangy chutney, pickles and/or a vinegary salad.