Rillettes, a kind of potted meat, are a specialty of the Loire Valley and nearby regions. People in the city of Tours and, especially, the city of Le Mans (of car racing fame) to the north maintain a friendly rivalry over the quality of their particular styles of rillettes.

According to the Grand Robert dictionary of the French language, the word rillettes first appeared in print in 1835 in the writings of Honoré de Balzac, the great 19th-century novelist. Balzac was a native of Tours.

The standard rillettes, available in markets, charcuteries, and supermarkets all over France, are made of pork. Contrary to what you might think, and unlike pâtés and terrines, rillettes are made exclusively with lean meat. Pâtés, on the other hand, include chunks of fat, pieces of pork or chicken liver, and ground or chopped pieces of meat that are far from lean. 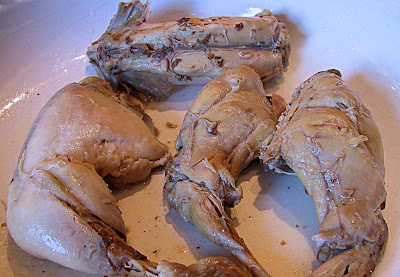 Pieces of chicken and rabbit cooked in white wine

The meat used to make rillettes is lean meat (pork shoulder or loin, for example) that is slow cooked in liquid or fat and then shredded or pounded in a mortar and pestle. The meat in rillettes can also be duck, goose, chicken, rabbit, or a combination of any of those. Rillettes can even be made with fish, including tuna or salmon. What we call "tuna salad" in the U.S. is known in France as rillettes de thon.

When I say the meat used to make rillettes is lean, I'm telling the truth. But what holds the shredded meat together to give it a pâté-like consistency is definitely fat. It's usually rendered pork fat, also known as lard in English (saindoux in French). It can also be rendered (melted) duck or goose fat. For tuna rillettes, the fat is vegetable oil emulsified with a raw egg yolk — the stuff we call mayonnaise. 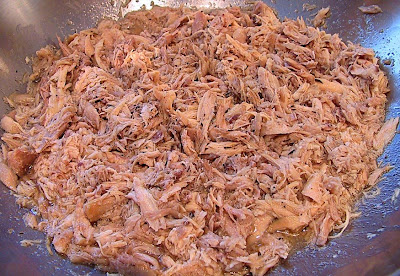 A few weeks ago the idea of making rabbit rillettes came to me. I'm not sure if it was because Intermarché had rabbits on special in their advertising flyer that week, or if the supermarket special was just coincidental. At any rate, I went and bought two rabbits and put them in the freezer, and then I waited for an opportunity. One of the rabbits got cooked with a cherry sauce back in June. I made the other one into rillettes yesterday. 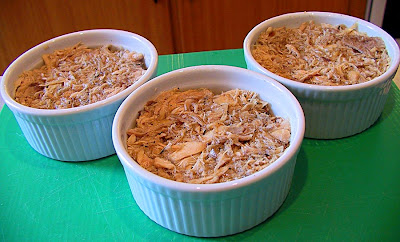 Pack the rillettes in ramekins and refrigerate them.

The process of making rillettes out of a rabbit can be pretty complicated or it can be very simple. The complicated way, as I learned from the first few recipes I found on the Internet, is to first de-bone the raw rabbit and then cook the meat. A year or two ago I de-boned a raw rabbit to make a Thai curry dish, and I really didn't want to start that kind of job again. It was a lot of trouble, and pretty messy.

The simple way to make rillettes out of a rabbit is to cook the rabbit, whole or cut into pieces — the legs and the fillet (or râble in French) — in liquid and then take the meat off the bones after it is cooked. That's so much simpler. Actually, the meat just kind of falls off the bone. And rabbit is a very lean meat, so it's not messy. 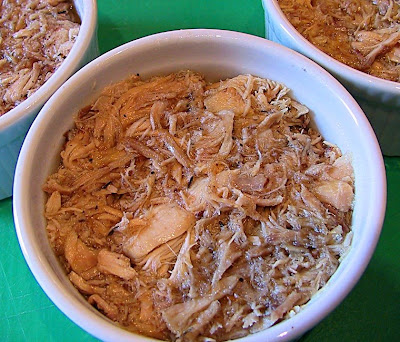 The rillettes before they are chilled...

Just to keep the recipe a little complicated, the one I decided to make called for marinating the rabbit in white wine with aromatics for 24 hours before cooking it. The aromatics include a couple of carrots, an onion, some garlic, some herbs, and salt and pepper. I ended up marinating my rabbit for just about 8 hours because of time constraints.

You then cook the rabbit right in the marinade on top of the stove. Add a little water if necessary so that the meat is completely covered. Let it simmer for 90 minutes to two hours. In my version, because the rabbit I bought was fairly small (just 2 lbs.) I also added two chicken leg & thigh pieces to the pot. Rabbit looks and kind of tastes like chicken, anyway. Nobody would ever know. 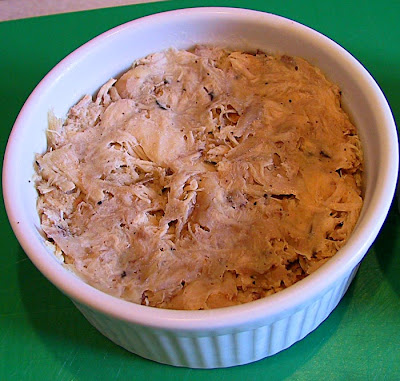 When the rabbit is cooked, you let it cool down and then you take the pieces out of the broth and start taking the meat off the bones. You have to be meticulous, because rabbits have a lot of little rib bones and you don't want any of those to end up in the rillettes. Strain the broth and save it for soup or for cooking rice or vegetables.

Once you have a bowl full of boneless rabbit (and chicken) meat — and believe me, it smells really good cooked this way — you put it in a pan and add as much fat (lard, or duck or goose fat) as you want. Let the fat melt and stir the shredded meat over low heat around for five or ten minutes so it's all well blended.

You need enough fat so that when you put the rillettes in the refrigerator and chill them down, the meat holds together kind of like a pâté. Don't put in any more fat than that. ;^) You'll want to be able to spread the chilled potted meat on toasted bread. Salt the rillettes generously because you are going to eat them cold.

Yes, you eat rillettes on bread or toast, just the way you eat pâté. You can make sandwiches with them. And with them you usually serve little sour pickles called gherkins. Those are called cornichons in French. Olives are good too.

We ate one pot of rillettes with our apéros last night. They were a hit, if I do say so myself.