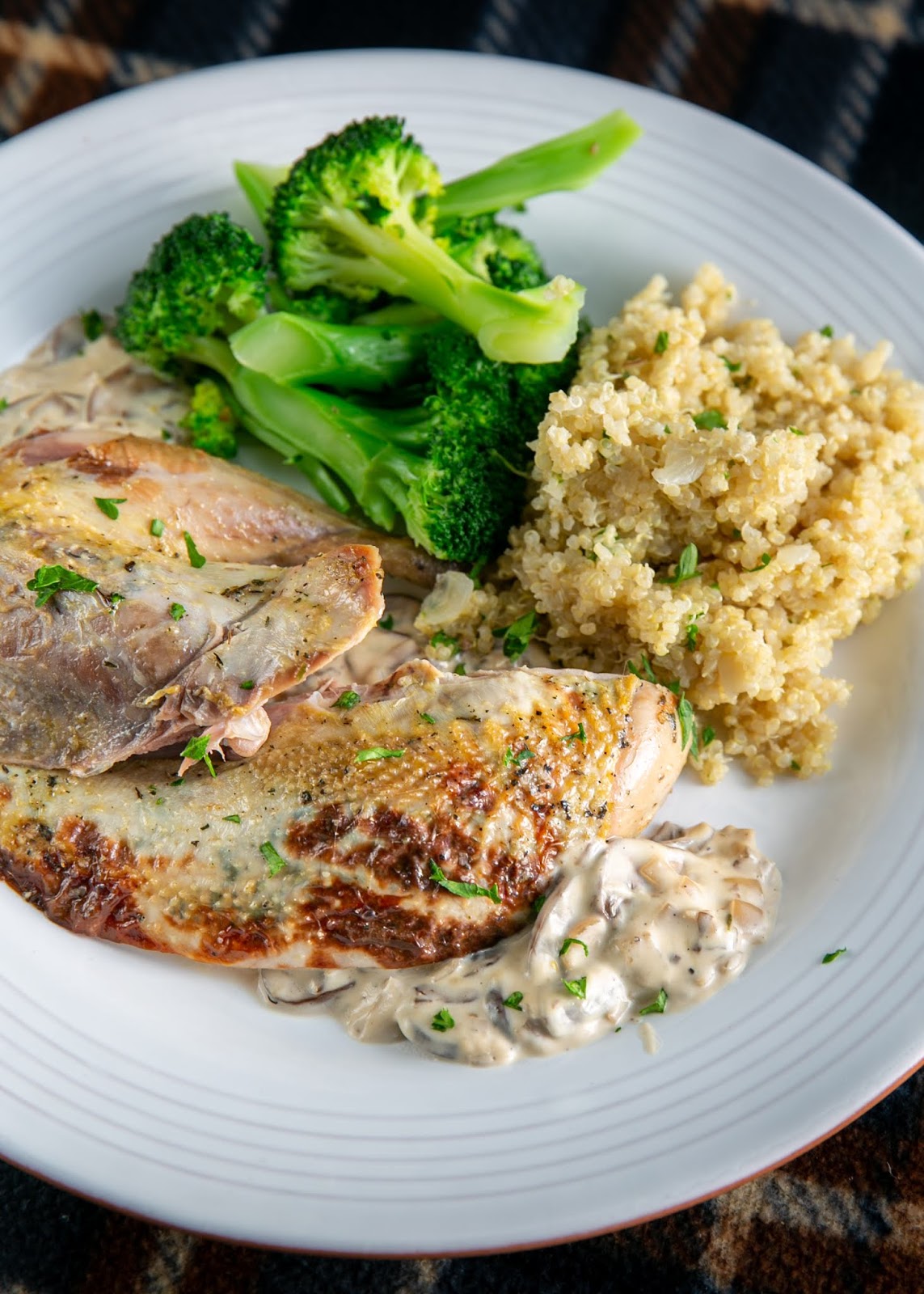 When I moved to Nebraska in the winter of 2013 to work at NEBRASKAland Magazine, I met Aaron Phillip Schroder during a photoshoot. At that time, Aaron was still the chef at Pheasant Bonanza Hunt Club in Tekamah, in addition to training dogs and guiding hunts. After the hunt, he invited us to see the clubhouse and gave us a sample of his delicious cooking. As someone who also loves to cook, Aaron and I hit it off immediately. 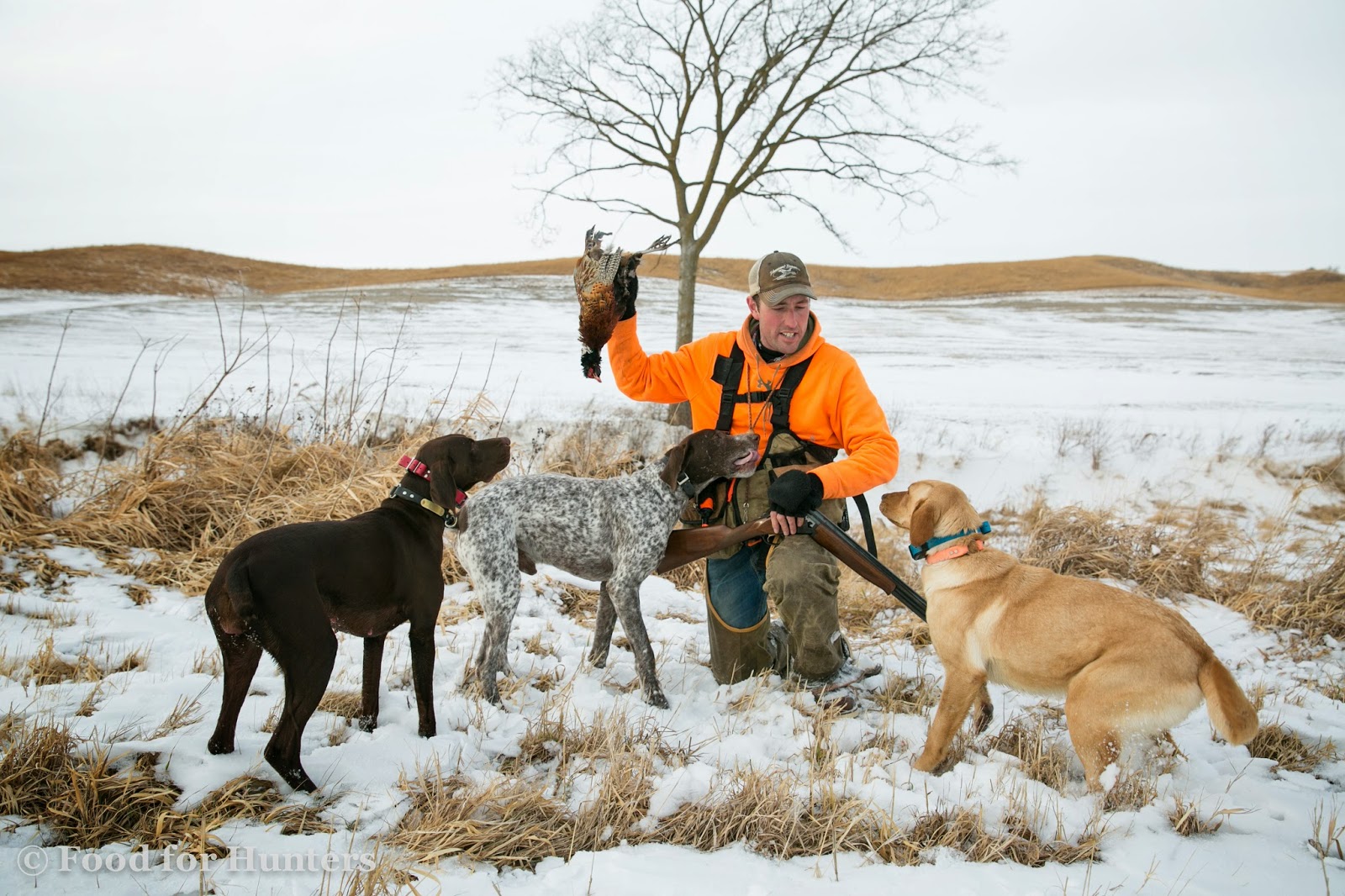 Aaron with Charlie, Remington and Rio hunting on a CRP field in NE.One of the first and funniest things Aaron told me was his hatred of canned cream of mushroom soup.

"They had cases and cases of it when I arrived," he said. "That's all anyone ever does with pheasant here, and it's terrible. I got rid of all of it."


This recipe is dedicated to Aaron, who shot this late-season wild rooster– see above photo– on CRP ground in northeastern Nebraska. The bird was carefully plucked, cleaned, aged and brined before its final destination in the oven. 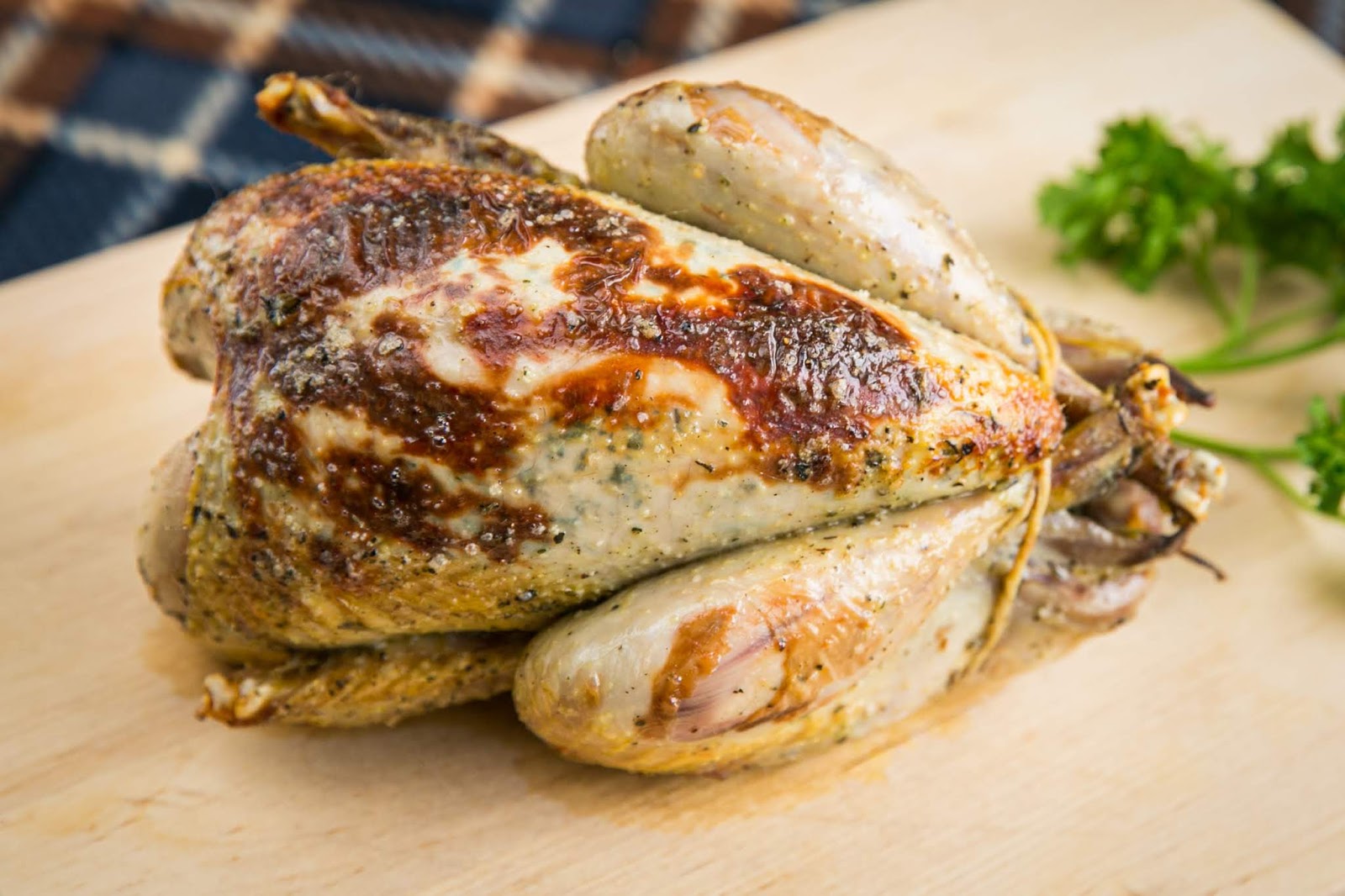 When cooking pheasants, there are two important things you need to do: age it and then brine it. Fresh pheasant can be bland and chewy, nothing to get excited about. Aging will help tenderize and develop the meat's flavor, and then a good brine will further enhance its flavor and ensure a juicy end product. Our friend Hank Shaw at the Hunter Angler Gardener Cook wrote an excellent post "On Hanging Pheasants." If you have the tools and capacity to do this, go for it, though make sure that your bird wasn't shot in the guts.

Since we're not set up for that in our little apartment, I opted for a more conservative approach. After the pheasant was plucked and gutted, I ran it under cold water, dried it with paper towels as best as I could and set it in the refrigerator on a dish on top of more paper towels for 6 days to achieve a similar effect.

Though Hank suggested 50-55º Fahrenheit for aging birds, average refrigerator settings will obviously be colder than that, which, according to deductive reasoning, would slow down the aging process. I bet I could've let the bird hang out for longer than 6 days in my cold refrigerator, but I was still happy to achieve some kind of success on my first try at a plucked bird.

When it came out of the oven, the meat was remarkably more tender and flavorful than the fresh pheasants I was used to eating. We hope you give this recipe a try. We had a great time putting it together.

UPDATE (10/14/2019): The method described in this post is best suited if you don't have a cold space to age whole birds or for slightly shot up birds that require more immediate gutting. Since the writing of this recipe, we've experimented with aging whole pheasants– feathers and guts intact– and it works well.

To age a whole bird, make sure it hasn't been gut shot. Allow it to hang in a refrigerator or a garage that is above freezing but below 40 degrees for at least 7 days. It is possible to age pheasant at warmer temperatures, but you do so at your own risk. I have a friend who ages his birds in a 50-degree-ish garage during the winter with great success.

If there's not enough space to "hang" the bird in your refrigerator, you can simply lay the birds on a shelf– just make sure that you provide enough space between each for air circulation. Open up the refrigerator a couple times a day to allow moisture/humidity to escape.

When aging at temperatures at 40 degrees and colder, the gutting afterward isn't bad. At these low temperatures, bacteria would be too slow-growing to give off much odor.

Plucking an older bird is much easier than a younger one. The skin on young birds is thin and can tear easily– extremely frustrating after all that hard work. 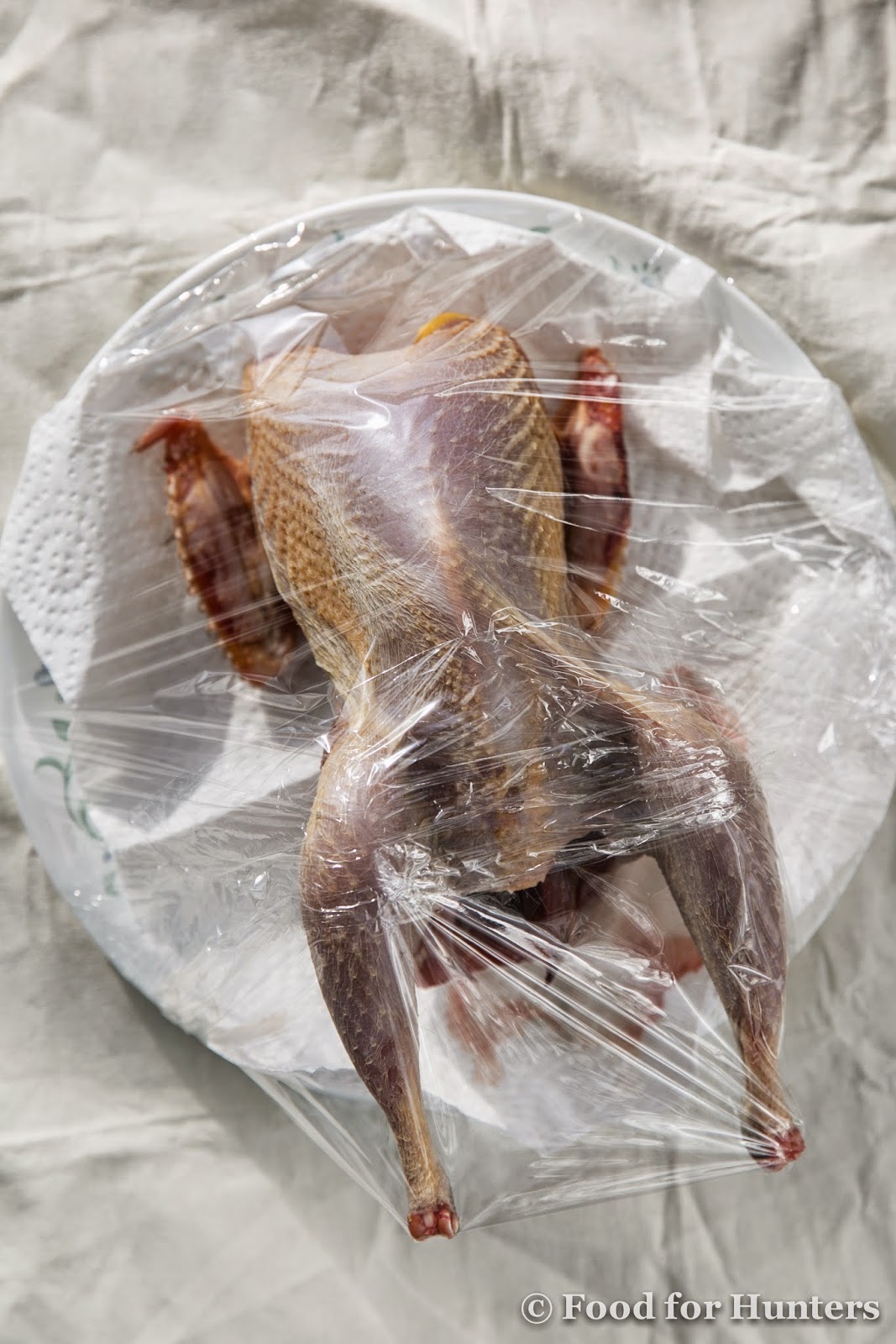 1. To age plucked and gutted pheasant, pat the bird dry with paper towels inside and out after you've washed it under cold water. Try to get it as dry as possible.

Place two layers of paper towels on a plate and lay the bird on top of it. Loosely cover it with plastic wrap and place it in your refrigerator to help the inside cavity dry out, about 2 days.

Once dried, replace all the paper towels and seal with new plastic wrap, snug this time, to prevent the skin from drying out too much. Put the pheasant back in the refrigerator for another 4-6 days. Replace paper towels as needed as they get wet and to keep things sanitary. 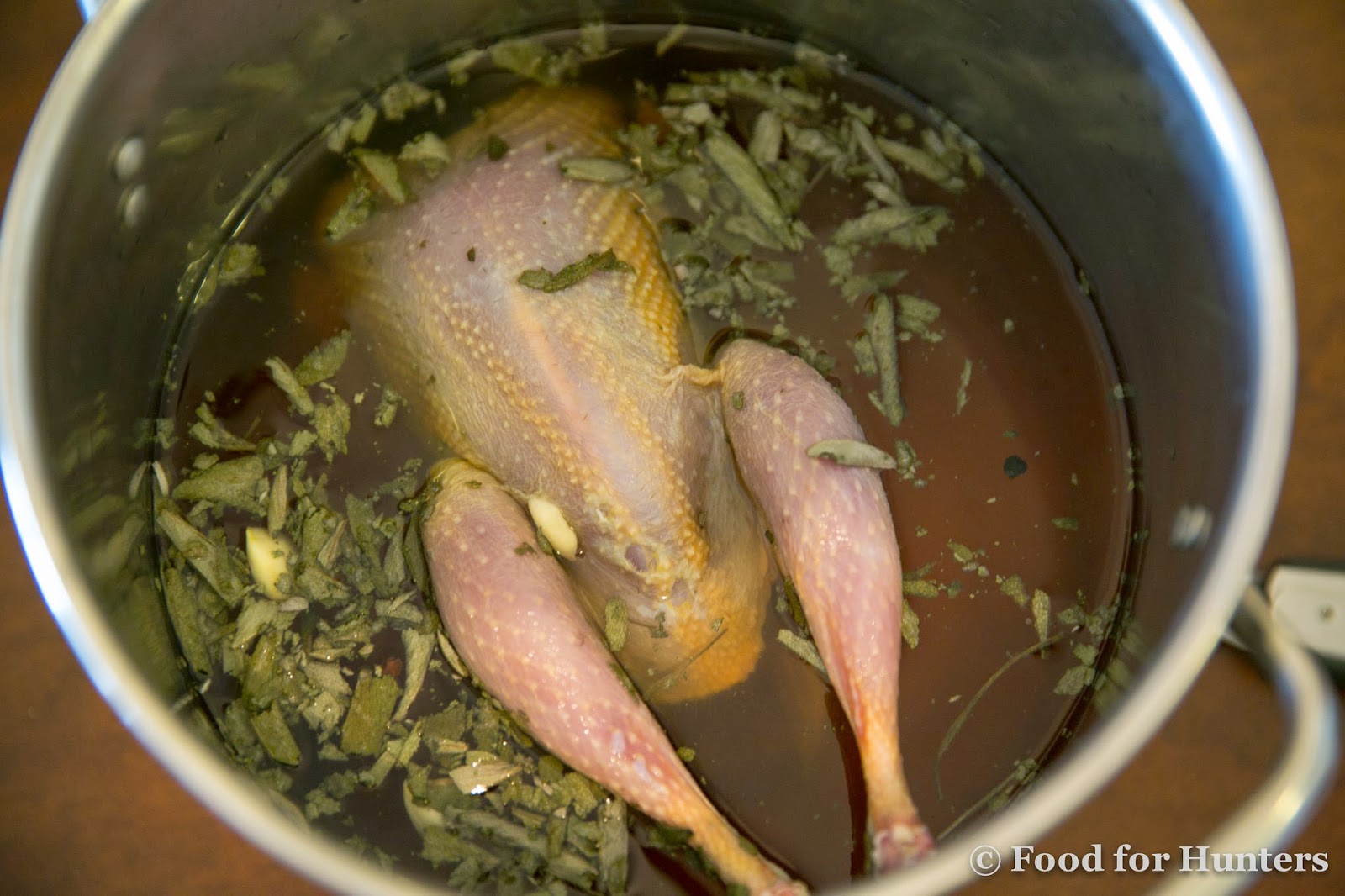 2. Once aged to your liking, make the brine. Warm up water, salt and brown sugar in a large pot, just enough so that the salt and sugar dissolve. Add in desired spices and allow mixture to cool.

Once cooled, completely submerge the pheasant in the brine. Refrigerate for 4-8 hours-- less time for a farm-raised bird, more time for a wild rooster. 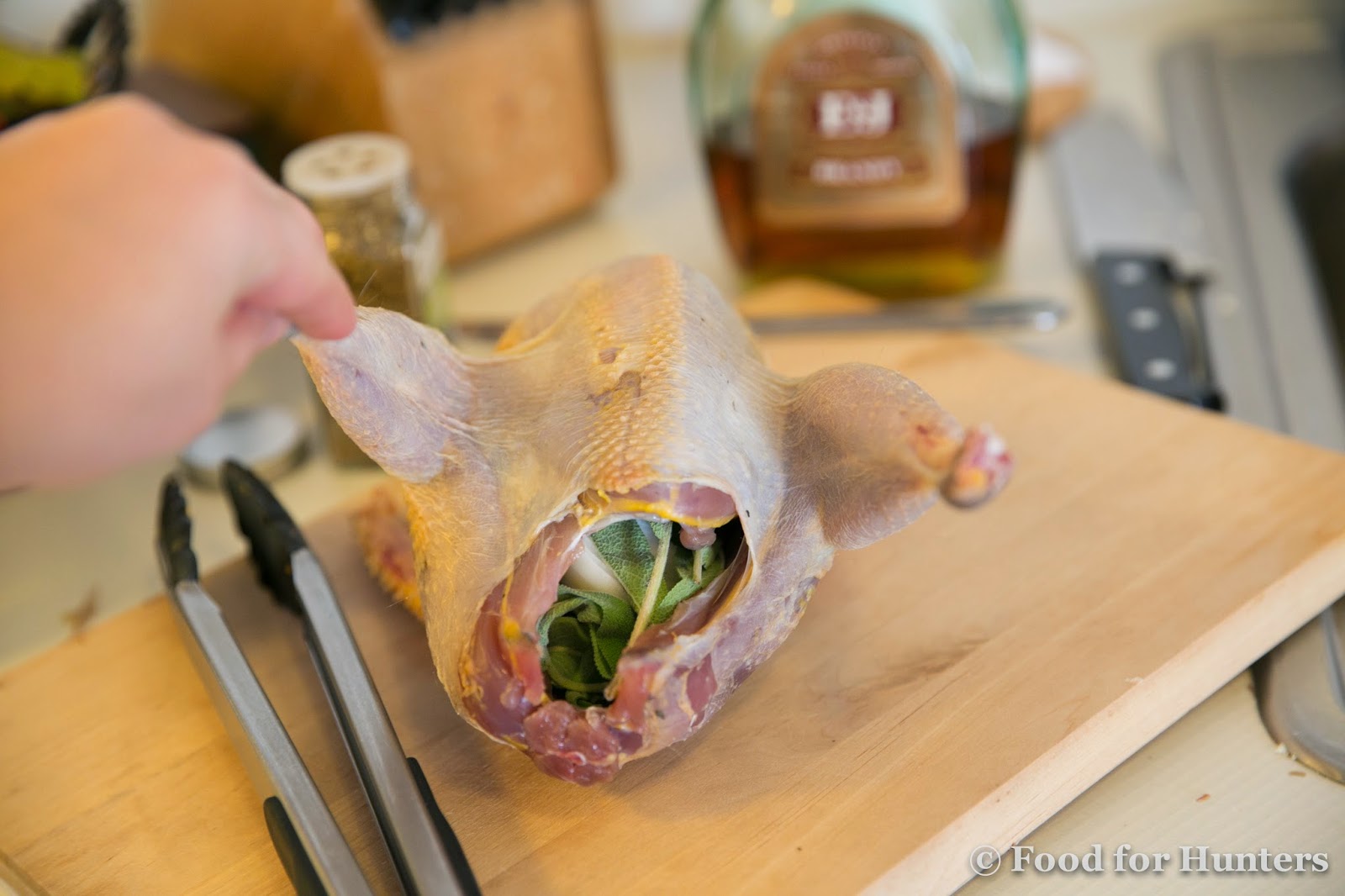 Take the pheasant out of the brine and allow it to come to room temperature for at least 30 minutes but no more than 1 hour before cooking. Then pat it dry with paper towels. Stuff the cavity with fresh sage and a wedge of onion. 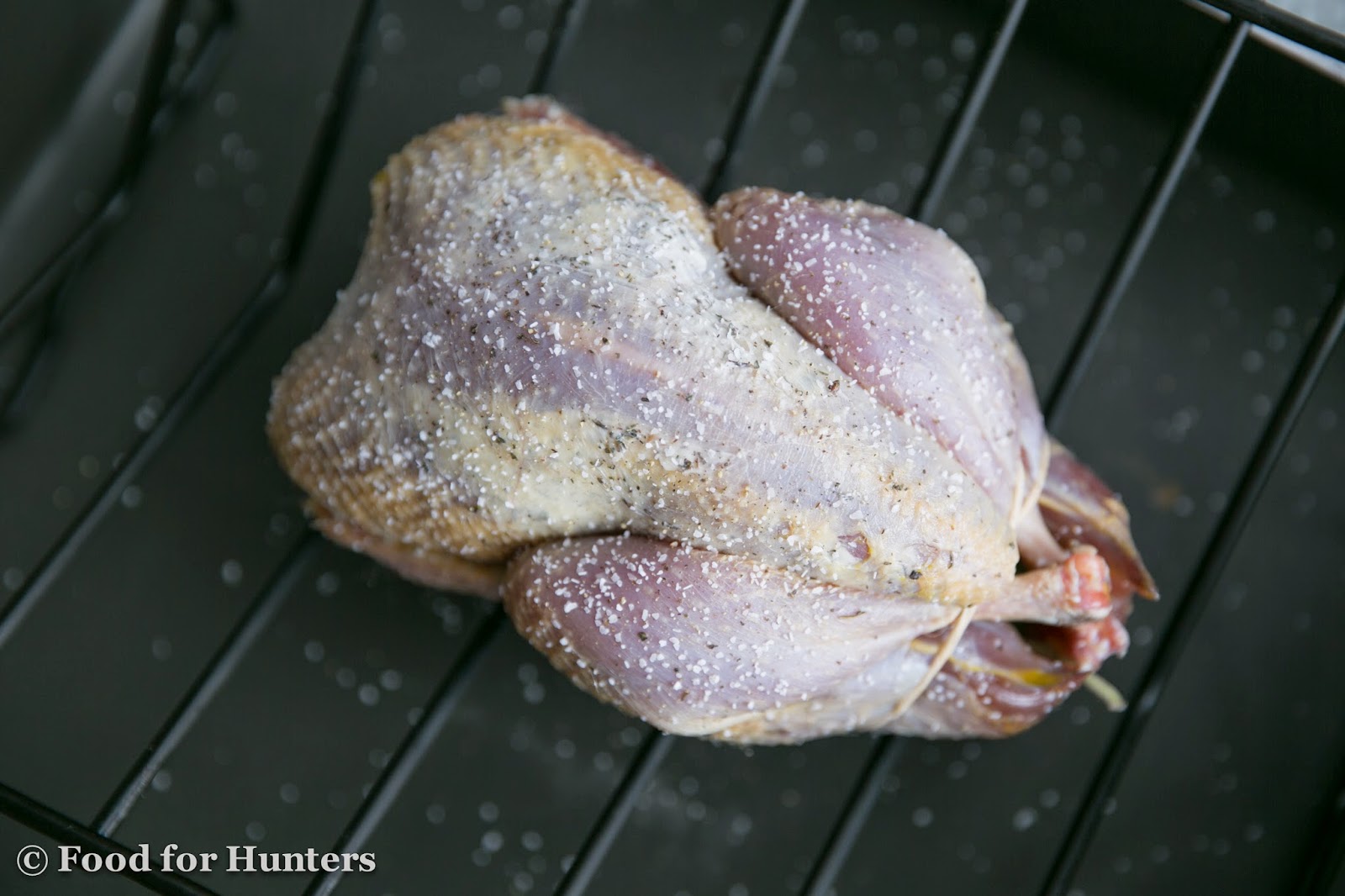 4. Mix 1 tablespoon of softened butter with 1 teaspoon of Herbes de Provence. Then rub it all over the pheasant and underneath the skin over the breasts. Lightly sprinkle salt and pepper all over the bird.

For more even cooking, we recommend that you truss the pheasant. Here's a great how-to video: https://www.youtube.com/watch?v=Gs1zHP7oabM 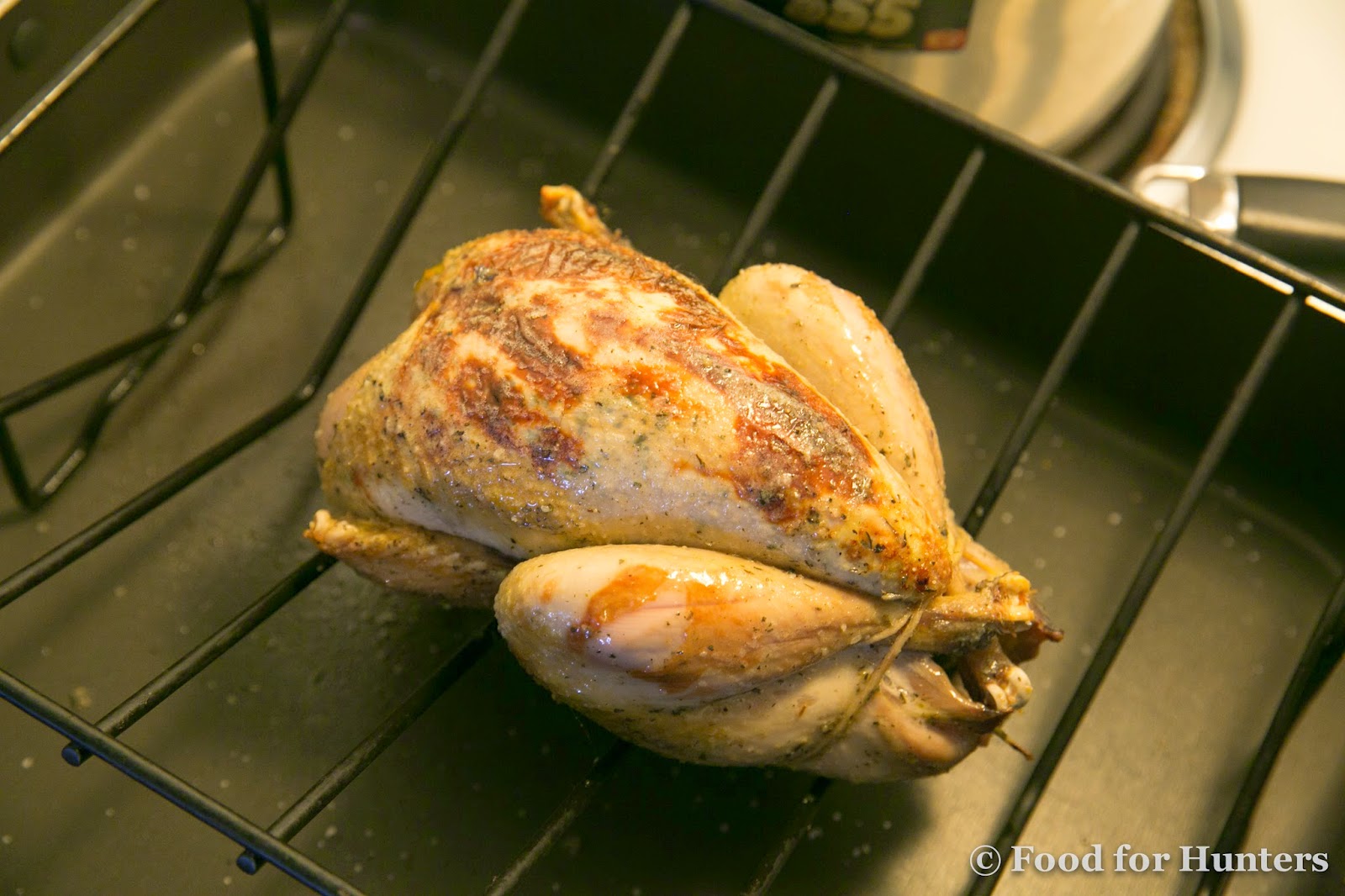 5. Place bird in a roasting pan breast side up. Roast in a 500ºF oven (or 450º) for 15 minutes. Then take it out and lower the oven temperature to 350º F. Roast the bird at this lower temperature for 30 to 40 minutes, or until thigh meat reaches at least 155º. We had a fairly good size wild bird, and 30 minutes ended up being perfect. Tent the breast with aluminum foil if the skin starts browning too much.


Allow the roasted pheasant to rest for 10 minutes so it can finish cooking and reabsorb its juices. 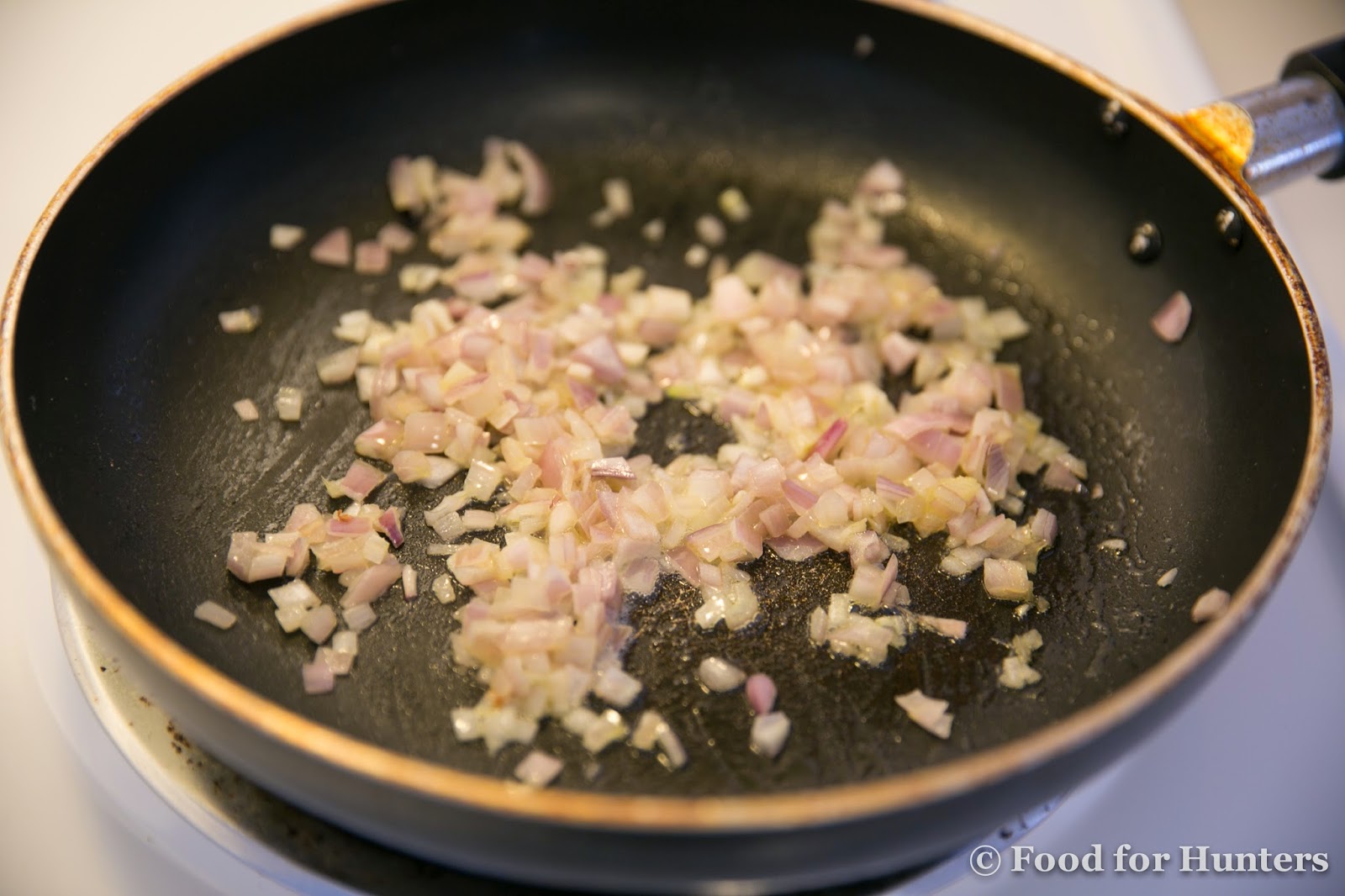 6. To save time, begin making the mushroom cream sauce while the bird is in the oven. 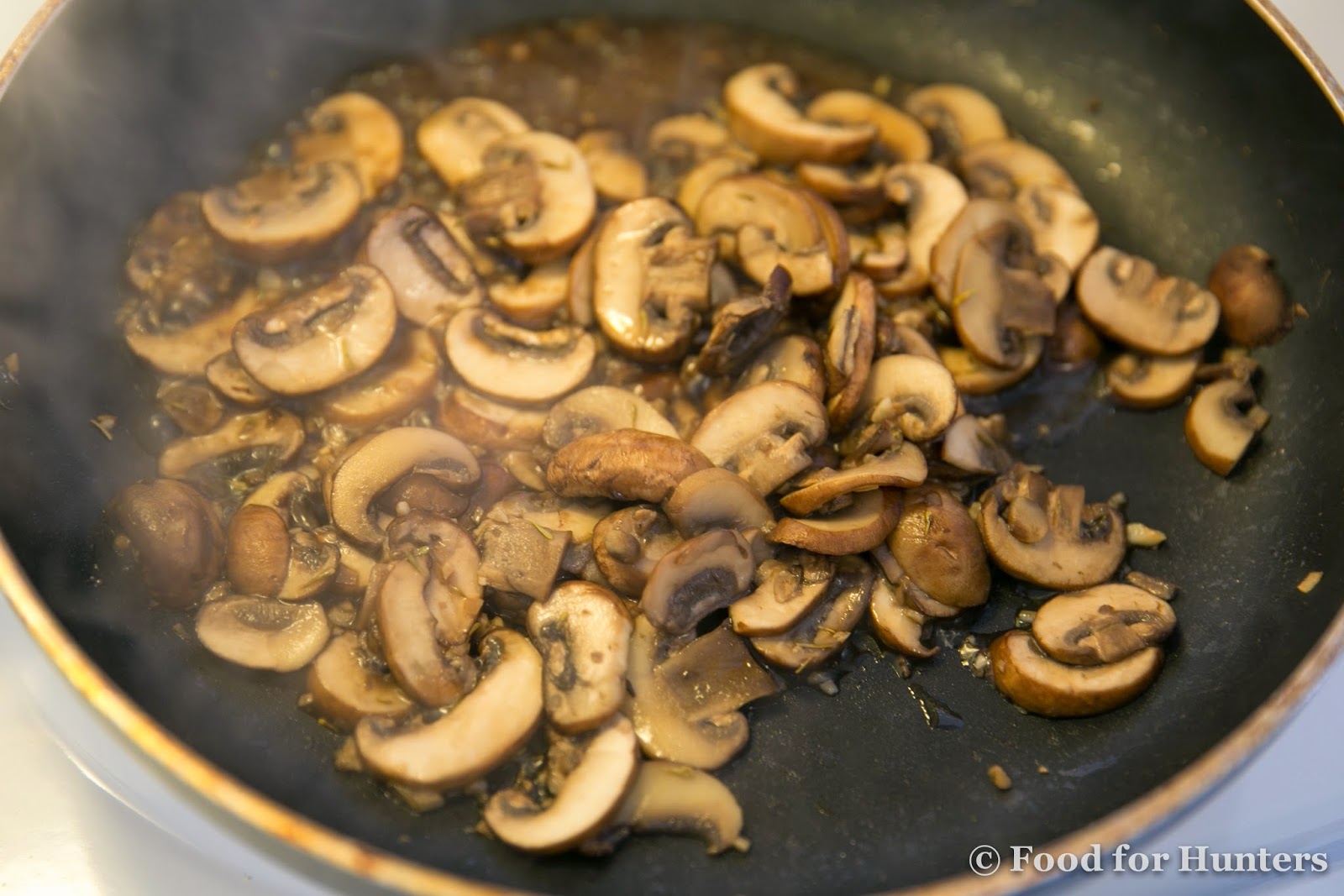 In the same skillet, heat another tablespoon of oil and then add sliced mushrooms, 3 cloves of minced garlic, a pinch of thyme and a pinch of salt. Sauté until mushrooms are slightly browned and then add the shallots back into the skillet. Add 1/4 cup of brandy and cook until alcohol is nearly evaporated. 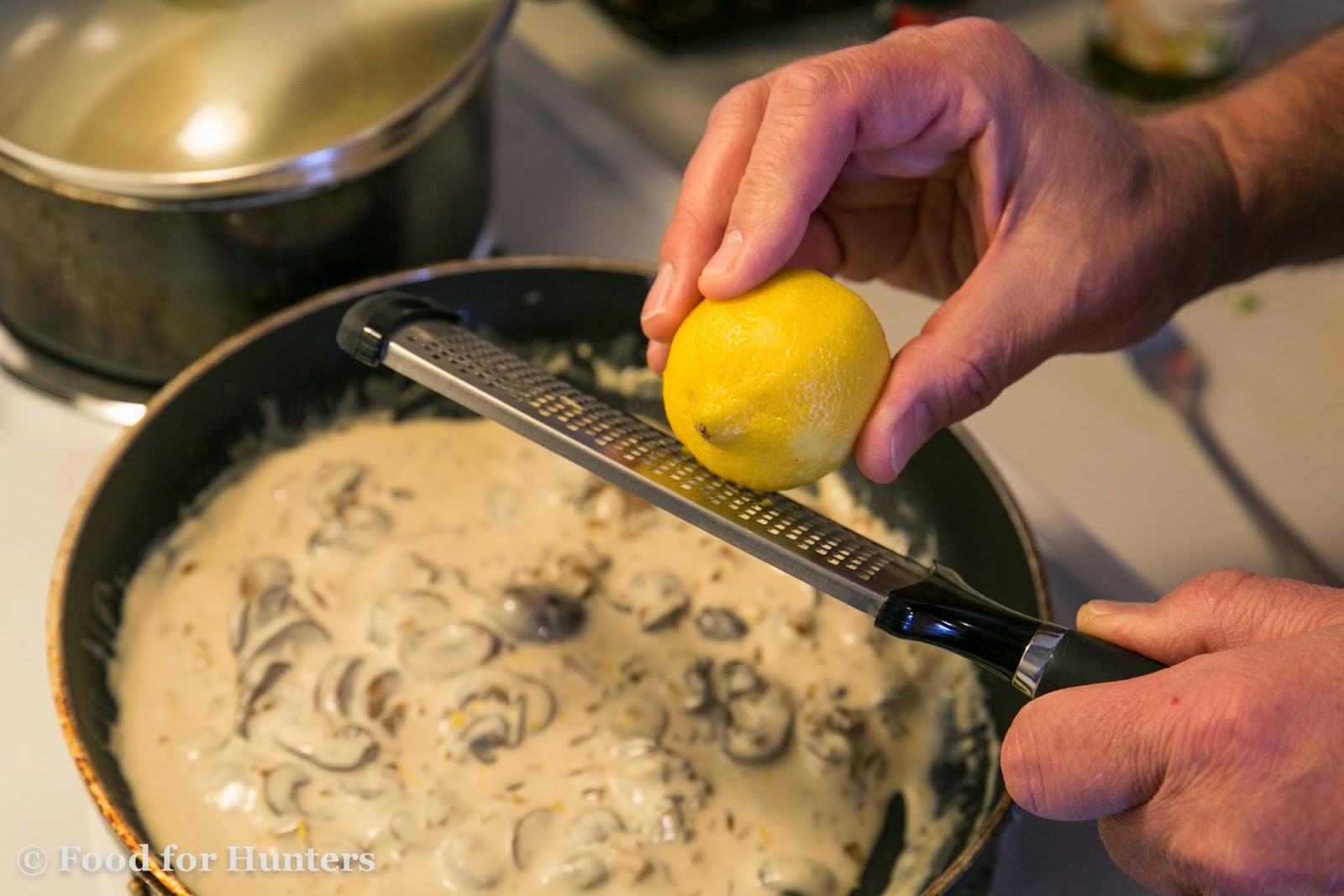 7. Lower the heat and mix in heavy cream, sour cream and lemon zest. Heat up the mixture at low simmer. Add salt and pepper to taste. 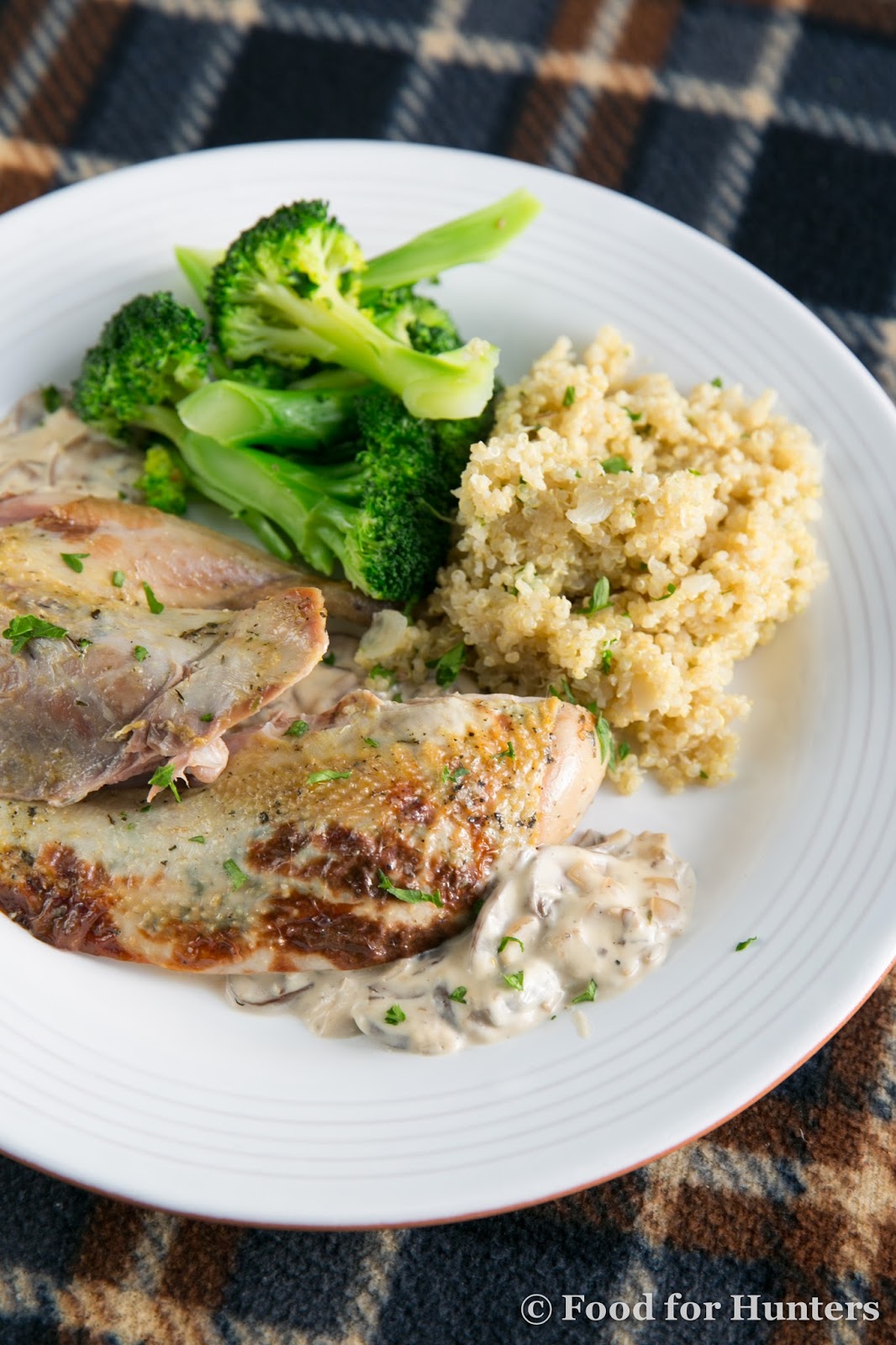 8. Break down pheasant by cutting out the breast meat, thighs, drumsticks and wings. Serve with mushroom cream sauce and garnish with chopped parsley.