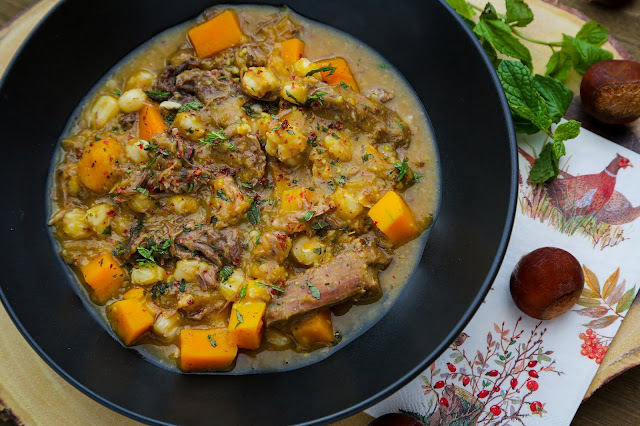 Sobaheg means "stew" to the Wampanoag (wamp-u-nuck), a Native American tribe that inhabited present-day southern Massachusetts and eastern Rhode Island. It was the Wampanoag who feasted alongside the Mayflower Pilgrims at the "first Thanksgiving" in 1621.

In William Bradford's journal "On Plymouth Plantation," the governor of the new colony recalled of the fall harvest that year: "there was great store of wild turkeys, of which they took many, besides venison, etc."

Before the first Thanksgiving, Bradford sent out four men to hunt fowl for the upcoming celebration. One would naturally equate fowl to wild turkey, considering our Thanksgiving table today. However, historians tell of a different menu. 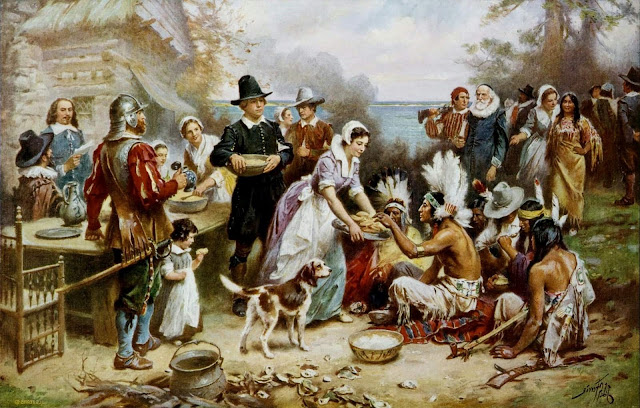 Although wild turkeys were plentiful in the region, so were other game birds. Bradford's fowling party were just as likely to return with plentiful ducks, geese and swans. Without historical evidence, we'll never know for sure what was really on the first Thanksgiving table, but one thing we do know: While turkey may have been featured, it was not the centerpiece that we feverishly give so much attention and care today. 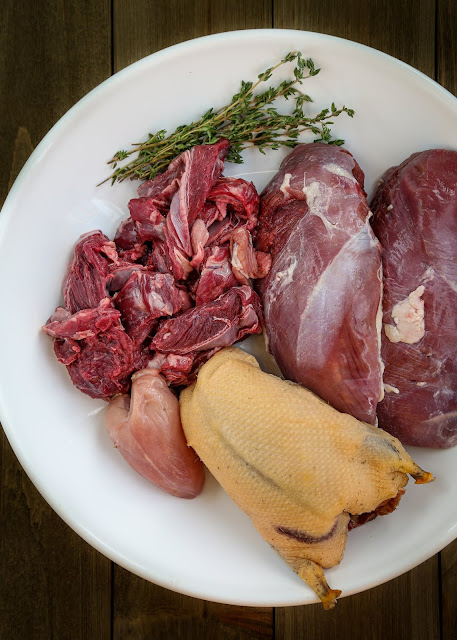 History.com wrote of the first Thanksgiving feast: "[Pilgram chronicler Edward] Winslow wrote that the Wampanoag guests arrived with an offering of five deer. Culinary historians speculate that the deer was roasted on a spit over a smoldering fire and that the colonists might have used some of the venison to whip up a hearty stew."

"Instead of bread-based stuffing, herbs, onions or nuts might have been added to the birds for extra flavor ..."

This sobaheg recipe does not commemorate the Thanksgiving that we know presently, but to the original one that happened nearly 400 years ago. Using a combination of duck, goose, venison, quail, onion, herbs and nuts, we hoped to capture spirit of the fall season and of the wild harvest.

Not to mention, this recipe is a good one to help clear out the freezer. If I had any wild turkey left, I probably would've thrown that in, too.


_____
The duck you see in the above photo is a shoveler–  not our favorite wild game, but in our house, the rule is if you shoot it, you eat it. As far as "best treatment" for strong-tasting game, stewing meat will help ease harsh flavors, but it won't get rid of it– I'd sooner use teal or mallard. If I could go back, I would've skinned the shoveler. The fat didn't taste very good, so plucking it was pretty much wasted effort. As a general rule: if it's a diving duck, skin it. 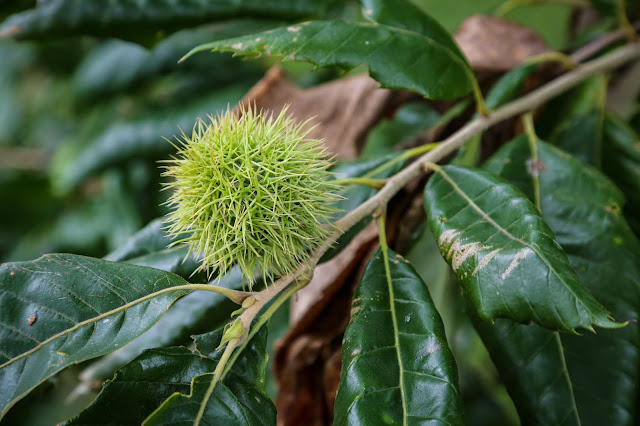 The use of ground nuts as a thickener makes this stew especially Native American. We used the Chinese chestnuts that we collected nearby at the end of September. Chestnut trees are not commonly found in the Midwest, but incidentally, the American chestnut would've been widely available to the Wampanoag along the East Coast. Chestnuts have a powdery, potato-like texture, and when ground, they make an ideal thickener that is deliciously floral. Other nuts you can use are pounded sunflower or walnuts.

To flavor the sobaheg, ground juniper berries and chopped mint were added at the very end– two spices that could've been used by Native Americans and Pilgrims in wild form. Traditionally, sobaheg would've been cooked in a clay pot over a smoldering fire.

The inspiration for this sobaheg recipe can be credited to Manyhoops.com. I suggest spending some time perusing this website, as it provides some eye-opening points on the first Thanksgiving, Native American and Pilgrim life. On sobaheg, they wrote: "Like most stews, this dish is easily adapted to seasonal ingredients ... Variations of this dish are still made in Wampanoag country today."

So use whatever game you have for this stew, preferably more sinewy, tough cuts that will benefit from some long simmering. Adjust cooking times accordingly.

1. Coat the bottom of a large heavy-bottomed pot with cooking oil and heat over medium. Pat all meat dry with paper towels, season generously with salt, and brown for a nice sear on all sides-- in batches. Return all the meat to the pot and cover with water. Add the halved onion.

Bring to a boil and scrape the bottom of the pot with a wooden spoon. Simmer covered for about 2.5-3 hours, or until all the meat becomes tender. Cooking time will vary depending on the type and age of game used, so check for tenderness periodically. Skim off any foam and scum that float to the top.

2. Meanwhile, cut across each chestnut shell and cover with water in a small saucepan. Boil chestnuts for 20 minutes. Remove from heat and working 2 or 3 nuts at a time, leaving the rest in the hot water while you work, peel off the outer hard shell and the inner paper-like membrane; the membrane is bitter and becomes difficult to peel when cooled even slightly.

If you have sensitive fingers, this won't be a fun task. I use a kitchen towel to hold the hot nut with one half while peeling with the other. You can buy packaged roasted and peeled chestnuts, though they are expensive.

3. Transfer all chestnuts to a food processor and grind as finely as possible. Set aside.

4. Back to the stew: remove meat from bones, if any, and discard bones. Discard onion. Stir in butternut squash, hominy, beans and ground chestnuts. Simmer for about 10-15 minutes, or until squash becomes tender but not mushy. Simmer longer for a thicker stew or use more ground nuts. Or add water/chicken stock for a thinner stew.